6 romantic things to do in beautiful Ljubljana 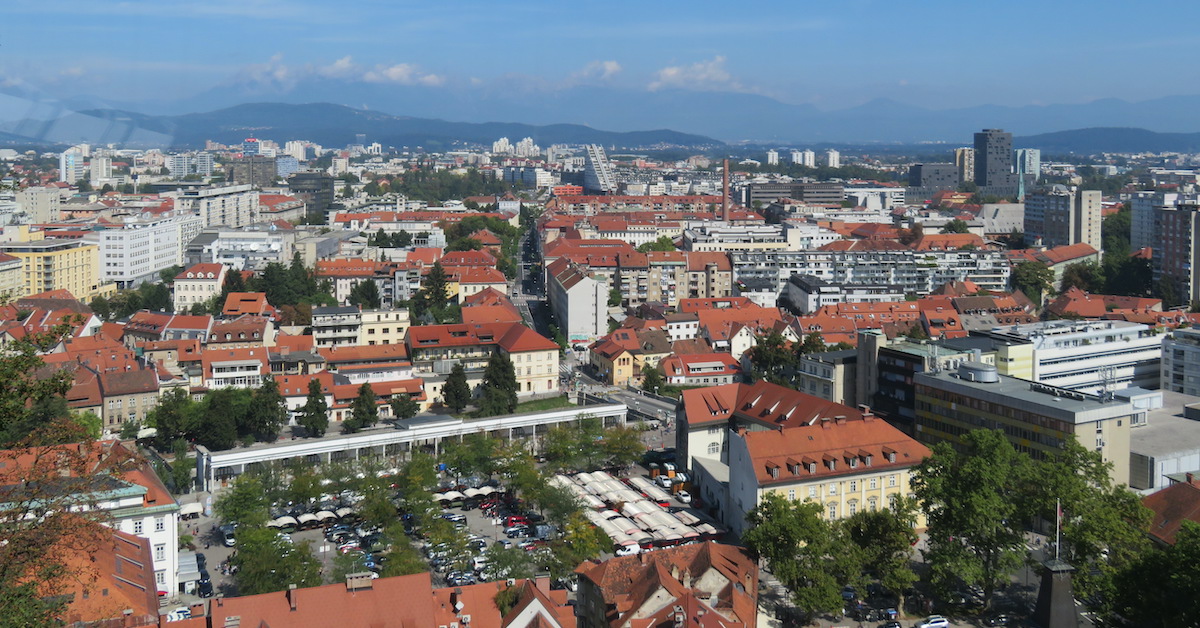 Nestled between the Julian Alps is Ljubljana, Slovenia, which was once part of Yugoslavia. Its position as a crossroads between Central Europe and the Mediterranean was cemented long ago by the creation myth of Jason and his Argonauts battling a dragon along the river.

Ljubljana’s strategic position made it a colony for Slavic tribes, Celts, Illyrians, Romans and the Habsburg-Austrian Empire. It is also the site of destruction by Attila the Hun in the 5th century, an earthquake in 1895, and Italian occupation during World War II.

Its history provides the features visible today: the mountain range that surrounds it, the bridges that cross the river, a castle above, and the small ships that sail these waters with passengers waving and greeting you in return. This setting invites visitors to admire the meticulously designed plazas leading to the winding river that partly lends the city its name. Ljubljana means “flooded river” from the Roman word alluvial.

For me, Ljubljana was a place to take a break and relax. Relaxation came about my third late night at Lajbah, a craft beer bar. My experience left me craving pizza. As I walked towards Hradeckega most (Hradecky bridge), the sounds of couples laughing along with their partially finished conversations caught my ear. Clear on my goal, I made my way to Gostilnica 5-6kg to devour my pizza while cracking horribly corny jokes as the staff began to clean up and close for the night.

As I walked out and back towards the river, the sounds I had heard earlier were still nearby and grew louder and louder. While I began to anticipate a group of goofing and noisy teenagers, the actual sight was the opposite.

Two retired couples held hands and kissed, while one of the gentlemen carried a bottle of wine. As they passed, one of the gentlemen shouted that they were enjoying their golden age. As if that comment was part of a joke I was unaware of, they all laughed and made their way through the shadows, leaving a trail of sound behind them. It took me this moment to look back over the past few days and realize that this was not the first such interaction I had encountered. In fact, it was trivial.

Perhaps it was the warm lighting of the cafes and restaurants that lined the bends of the river, the flow of wine available at almost every corner, or the fortified remains of the Roman Empire that provided discreet places where couples could spend a few minutes alone. Yet, it could also have been the perfect combination of all of these that made Ljubljana one of the most romantic destinations most travelers had ever considered.

An ideal day in Ljubljana should be spent relaxing, taking a light walk and using your time to enjoy the scenery with someone.

Prešeren Square is named after national poet France Prešeren, whose statue forms the centerpiece and is juxtaposed with a statue of his lover, Julija Primic. Your stay in the old town can be spent walking around this square. Redesigned after the earthquake of 1895, the square now serves as a meeting place, pedestrian zone, place of entertainment, place of demonstration and general introduction to the region.

Surrounding you are other landmarks, such as the Hauptmann House, the Urbanc House, the Mayer Department Store, and the Seunig House, all of which serve as examples of the architecture that was popular in the mid-20th century.

During your stay here, there is no doubt that you will pass through this area frequently, especially because of the number of cafes and restaurants around the square.

Look at the river to see…

Along one of Old Town’s most popular bridges, Triple Bridge, you’ll find a few vendors selling sweets as well as the option to take a ferry up and down the river. This bridge is a physical representation of the three major periods of the city’s history, connecting historical, medieval and modern Ljubljana. There has been a bridge at this location since 1280. Onward to…

Slow down and take a walk. After passing a few shops, you’ll come to Town Square and its centerpiece, the Robba Fountain, inspired by Rome’s Fountain of the Four Rivers. Looking around you will no doubt see arrows to your left. Once you’re ready, head in this direction to visit Ljubljana’s Roman Catholic Cathedral.

This area lends itself to exploration, so take a walk by the river and notice the details of the bridges that take you back to the old town. Eventually, you will enter the central open-air market.

Monday to Saturday hosts the local market, while Fridays from March to October offer local chefs and specialties from around the world. At the end of the market, you will come across the Dragon Bridge, reminiscent of the creation myth related to the Battle of the Argonauts.

Once you’re done exploring, you should head back to Vodnikov Square. From there, you can choose to take the footpath or take the funicular up to…

Possibly one of the most romantic places in Ljubljana, from Ljubljana Castle you have several viewpoints over the city. My favorite is the one in the observation tower, where the staff will mention the great view of the horizon.

On the day of my visit there were several vendors and performers as part of a rotating schedule of activities. Undoubtedly, something interesting will take place during your own visit. Start by exploring the castle before taking part in everything that happens there.

The area can get busy at times, so if you’re looking for more privacy, go and wander around. There is a boardwalk that will take you through the small forest with a view of the city. Take a break on one of the park benches facing the city and enjoy a moment of solitude.

You can find small meals and drinks in the castle grounds or from a vendor in the area. Turn your time there into an impromptu private picnic.

When you are ready to move, head to Castle Avenue, which is an avenue lined with chestnut trees that connects the castle to the Šance, which are the remains of the ancient fortress that served as the precursor to the current one.

There is also a vineyard which, on occasion, houses a pop-up restaurant hosted by a local chef. Tables book up quickly, so it’s best to book in advance. Browse Slovenian wine selections.

Take your time before deciding to go back down the hill. When you’re ready, head to Prešeren Square, which can host an event if it’s the weekend. Follow the river on the Old Town side to reach…

Mostly populated by locals and a great place for people-watching, Congress Square features medieval ruins and the site of two declarations of independence from the Austro-Hungarian Empire and Yugoslavia after its dissolution.

Various buildings surround the square, including a university – but above all, the Philharmonic Hall. If the box office is open, you will probably be able to buy a ticket for the evening show.

Ljubljana has a number of parks, but its most impressive park is within walking distance of Congress Square. Take Šubićeva ulica, which starts at the northeast corner of the square, and follow it to its end at Bleiweisova cesta. On the other side is…

With a number of walking paths providing a brief respite from the city, you can wander aimlessly, view the many statues, or stop at one of the cafes located on the grounds. If you want to see some local art, return to Bleiweisova cesta and head to Cankarjeva cesta for the Museum of Modern Art or the National Gallery on Prešernova Cesta.

Despite all these suggestions, the best part of Ljubljana is its simplicity. Ideally, you could see it all in one day, but why would you?

What makes the city an ideal romantic destination is its slower pace. Return to the water’s edge with your own bottle of wine and your partner and sit down. Let the sun set as it roams the landscape.

Stop at the Gostilna Sokol restaurant, which serves local dishes, and choose this time to breathe and relax. You don’t have to be somewhere or do anything.

Take a moonlit walk along the river. Visit Vigò for their ideal ice cream sponge cake for two. Savor every moment.

Central Europe has a lot to offer and the setting of Ljubljana is tranquil. You can escape fellow travelers and find space to savor a piece of the country for yourself.