Best TV bets with ‘Stranger Things’, ‘Only Murders in the Building’, Chris Pratt, ‘The Upshaws’ 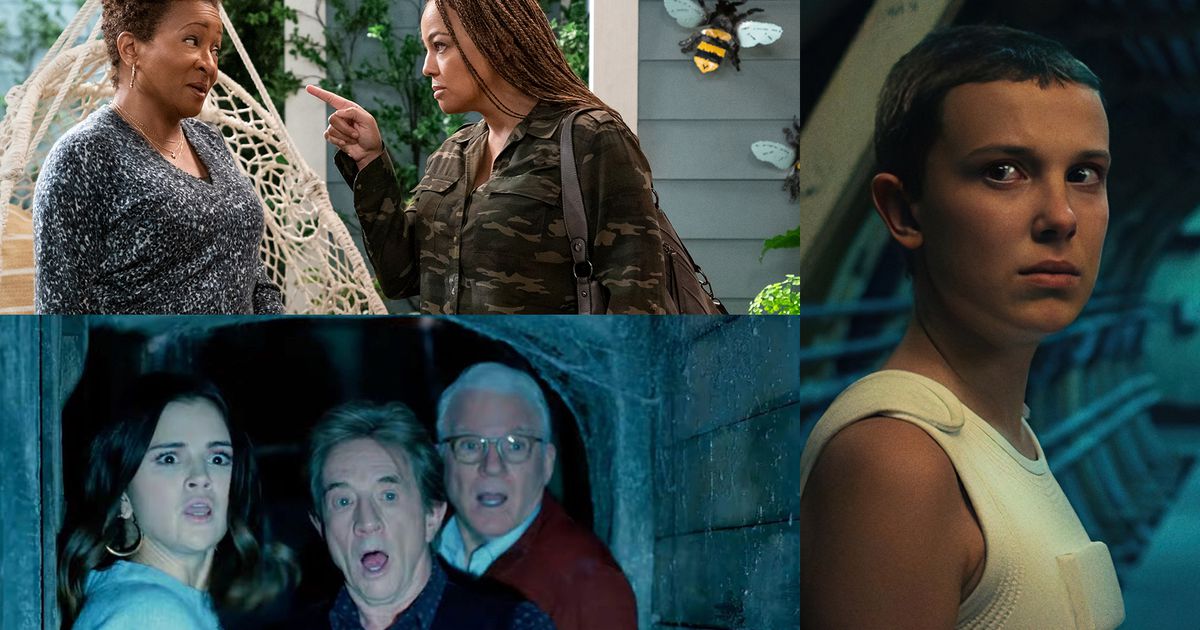 “Don’t Forget the Lyrics” 8 p.m. Fox – The season’s youngest singer and a dad with a falsetto each attempt the Million Dollar Challenge.

“In the Dark” 9 p.m. the CW – Gene (Matt Murray) and Josh (Theodore Bhat) attempt to tie Murphy (Perry Mattfeld) to their latest case and end up with something completely unexpected.

“Irma Vep” 9 p.m. HBO — Mira accepts offers from her sponsor and agent while immersing herself in her new role; René lives a vision and a crisis.

“Raisers” 10 p.m. FX — Jim and Jackie are both struggling in their new situation. Luke must choose between Jacob and Ruby.

“Only Murders in the Building” 00:01 Hulu (second season start) – Everyone’s favorite true-crime podcasters try to clear their name and do so by solving another murder along the way.

“Damn” 3:01 Netflix – When an alien invasion interrupts a bachelor party, two childhood friends reunite to form the laser tag duo they were once meant to fight back.

“The secrets of the wives of the oligarchs” 3:01 Paramount + — The women partners of the billionaires who put President Vladimir Putin in charge risk speaking out.

“Endangered” 9 p.m. HBO — Chronicles of a year in the life of four journalists living and working in democratic countries where freedom of the press has always been considered a “given”. Yet as online disinformation proliferates and world leaders brazenly disparage the press, distrust of mainstream media is growing and journalists are increasingly faced with situations more typical of war zones or autocratic states.

“Bamax! » 3:01 Disney+ (new series) – The all-new healthcare caper series returns to the fantasy town of San Fransokyo where the affable, bouncy, and inimitable healthcare companion robot Baymax sets out to do what it was programmed to do: help others.

“The Upshaws” 3:01 Netflix (second season start) – The Upshaws are still struggling with trust issues and comedic shenanigans that made the first season a success.

“The Flash” 8 p.m. The CW (eighth season finale) – With The Flash (Grant Gustin) still reeling from everything that just happened, the rest of the team rallies to support him when he needs it most.

“Heartland” 8 p.m. UPTV – The man who shot Ty comes back to Hudson and Amy and the rest of the family wonder how to react. Jessica enlists Katie and Parker’s help in dealing with a demanding Dude Ranch guest while Lou is away.

“Chrisley Knows Best” 9 p.m. US – Todd and Faye accidentally meet at a swingers party while the kids seek their own adventure.

“The Old Man” 10 p.m. FX – Both Chase and Harper try to push their plans forward, but their choices backfire.

“The Princess” 00:01 Hulu — When a beautiful, strong-willed princess (Joey King) refuses to marry the cruel sociopath to whom she is betrothed (Dominic Cooper), she is kidnapped and locked in an isolated tower of her father’s castle.

“For All Mankind” 12:01 a.m. Apple TV+ — A surprise maneuver during the trip to Mars prompts desperate measures.

“Physics” 00:01 Apple TV+ — Tyler and Bunny are concocting a scheme. John confides in someone who was close to his father. Sheila and Greta receive advice from Vinnie Green.

“The Terminal List” 00:01 Amazon Prime (New Series) – James Reece (Chris Pratt) and his entire platoon of Navy SEALs are ambushed on a high-stakes covert mission. Reece returns home to his family with conflicting memories of the event and questions about his guilt. However, as new evidence emerges, Reece discovers that dark forces are working against him, endangering not only his life, but those he loves.

“The Black Hamptons of Carl Weber” 3h01 BET+ (new series) – The brewing feud between the Brits and the Johnsons, where the difference between old and new money is very apparent in a very posh area of ​​Long Island.

“Becoming Elizabeth” 8 p.m. Sunday Starz – Having been kicked out of Catherine and Thomas’ house, Elizabeth is among strangers in the house of Kat’s brother-in-law, Antony Denny, and she’s terrified that anyone discovering her secrets from Chelsea Place.

“Animal Kingdom” 9 p.m. Sunday TNT – Codys preparation for the next job these days; a reluctant Andrew, Baz and Julia do a job for Smurf in 1992.

“Westworld” 9 p.m. Sunday HBO — A poetic summary: I heard a fly buzzing when I died.

“The Man Who Fell to Earth” 10:00 p.m. Sunday Showtime (season one finale) – No word yet on whether a second season is coming.