BYU basketball: Why Spencer Johnson sees big things ahead of the Cougars 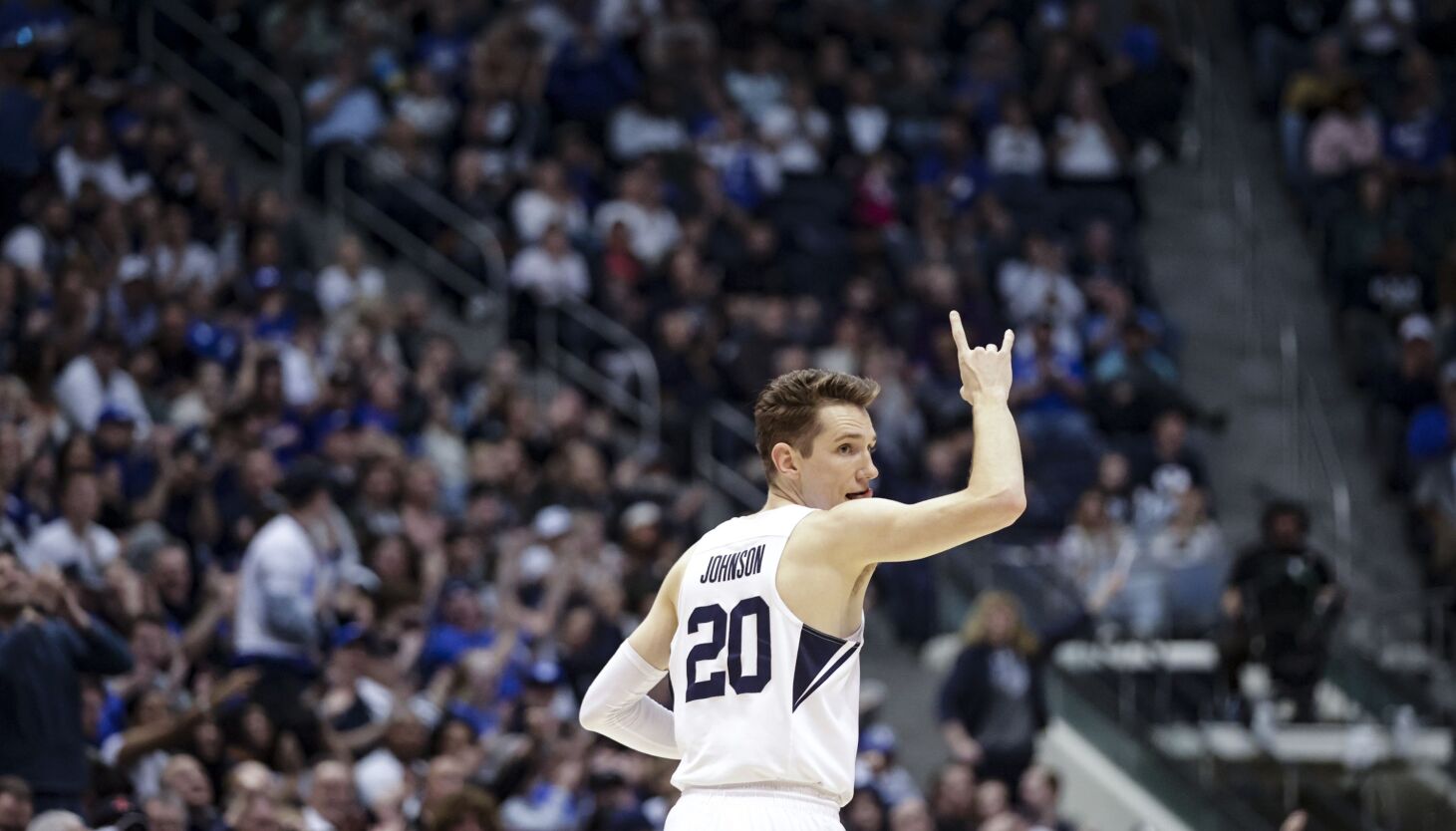 It’s been well over a month since BYU’s basketball program wrapped up its season.

During that time, there have been many changes for Mark Pope and the Cougars.

Assistant coach Chris Burgess took a job at arch-rival Utah; Caleb Lohner, Gideon George, Hunter Erickson, Seneca Knight and Gavin Baxter are among the players who entered their names into the transfer portal, although George opted to return to Provo.

Lohner ended up at Baylor and Baxter joined Burgess at the U.

Within the program, all the changes evoked a range of emotions.

“It was a bit sad. I was close with Coach Burgess and my teammates who left,” said senior goalkeeper Spencer Johnson. find what they want. You can’t really blame them for trying to find a new opportunity. Definitely sad. I will miss them very much. I was close to a lot of them.

Many outside the program may have thought the sky was falling.

Amid all the upheaval, Johnson posted a simple but direct message on Instagram in mid-April, using, in part, one of his favorite quotes: “A gentle sea never made a skilled sailor.

Then, he added: “I just want everyone to know that I believe in my teammates and in this coaching staff. I believe we’re going to win here at BYU and we’re going to be incredibly successful! We work too hard and have too much support around us not to succeed. We will do everything. So stay positive and keep believing. We have great things ahead of us! »

Weeks after posting that message, Johnson recently told the Deseret News that he stands behind the statement.

“I still believe in it,” he said. “I’m not going anywhere, man. I am here for the long term.

Johnson added that he has complete confidence in the coaching staff’s ability to rebuild the roster for the 2022-23 season.

“It’s just the job they did. They are still there. They are there before we get there and they stay long after. It’s crazy, but I actually think they’re busier now than they were during the season,” he said. “They’re always looking for guys to fit their model. They bring guys to campus. They do a great job recruiting. I know they’re going to put together a team.

Johnson and his remaining teammates have been involved in the recruiting process, particularly with transfer portal players who have visited campus in recent weeks.

Coaches are texting players and letting them know what activities are planned and which ones may show up to help with recruiting. Last week, for example, the coaches hosted a rookie at Pope’s for dinner and a movie.

“It’s been good interacting with these guys and getting a sense of who they are,” Johnson said.

One of the rookies who visited Provo, point guard Rudi Williams, a transfer from Coastal Carolina, signed with BYU on May 7, the day after Johnson spoke with the Deseret News.

Williams, a 6-foot-2 native of Hamilton, Ont., still has one season left to qualify after 117 games at Coastal Carolina, Kansas State and Northeastern Oklahoma A&M.

Last season, Williams averaged 14.7 points per game while shooting 51% from the field, 44.7% from 3-point territory and 73.5% from the free throw line. He will try to fill the huge gap left on the guard line by Alex Barcello and Te’Jon Lucas.

Davis ranks 22nd all-time in college basketball career points going into next season. If he continues his scoring pace as a super senior, he would finish with over 3,400 career points. That would rank second all-time behind Louisiana State’s “Pistol” Pete Maravich.

According to Stadium’s Jeff Goodman, Davis was “leaning toward BYU,” but name, image and likeness deals, which are estimated to be in excess of six figures, played a role in his decision to stay at Detroit-Mercy.

The Cougar coaching staff therefore still has some work to do to complete next year’s roster, with three more spots available.

Johnson’s brother, Isaac, a 7-foot center at Oregon last season, walked through the transfer portal and while drafted by BYU ended up at Utah State.

“It’ll be awesome. I’m excited for him,” Spencer said. at BYU). He went through the recruiting process. I guess he decided he liked Utah State better. I would have loved to play with him. It would have been great. But I’m glad for him that he has found his place too.

Johnson looks forward to next year’s game with his brother when the Cougars visit the Aggies.

“I think we’re going to play them up there this year. It will be really fun,” he said. “Their audience is crazy. I hope he gets a lot of game time. It will be great to play up there and play against him.

Meanwhile, during the offseason, Johnson is focused on improving his game in addition to taking on even more of a leadership role.

“Coach Pope and I have talked about it a lot. Being one of the guys who’s been here for a few years and knows our culture and how we want to run things, that’s a step I’m going to take – to take on more of a leadership role,” he said. . “I’m really looking forward to it. It’s going to be fun and challenging. It’s a little daunting at times. You have to bring in all these new guys and try to level them up and try to make it all work Very good. I can’t wait. I can’t wait.

“Talking more to all my guys in training and off the pitch, trying to get together with them and doing activities and things like that,” he added. “On the pitch, I want to be more comfortable with the ball in my hands, be a playmaker outside of dribbling and pick-and-rolling, things like that. This is definitely a step that me and my coaches have talked about and want to take. That’s what I’m going to work on. »

While Johnson and the rest of the program wait for the roster to solidify, he remains optimistic about what that roster will turn out to be.

“This transfer portal is what it is. You have tons of moving parts,” he said. “But I am convinced that these coaches will be the best training possible. We are going to be really, really good this year. »