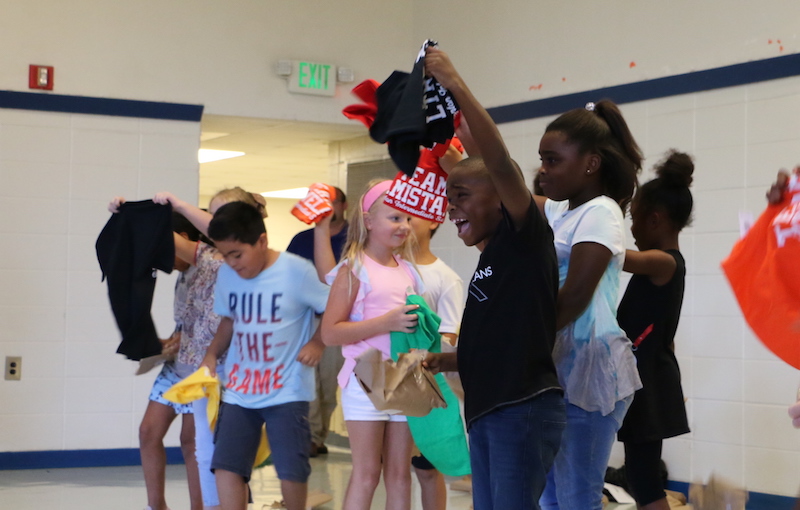 Clanton Middle School celebrated the return of the house system with a ceremony on August 29 to divide third-graders and all new fourth- and fifth-graders into one home.

Program coordinator Lisa Brown said each of those students took the stage to unwrap their t-shirts that would reveal the house they would join.

She said those who were already in the homes cheered as they waited for the shirts to be unpacked.

This house will be the team of students throughout their stay in Clanton.

The program is an adaptation of a module used at Ron Clark Academy in Atlanta. However, CIS has six houses instead of four.

Those who were already in the houses came to the assembly in shirts led by their banners.

Brown said there were changes to the schedule for this year. Each house has a coat of arms this year, in addition to its color and its signature T-shirt. Brown said each crest includes images with special meaning for that particular house. These symbols will be explained at the first house meeting on September 27.

Teachers now have the option of using a School Dojo app dedicated to keeping points for each house.

Each staff member is also a member of the house system.

“Staff members chose their homes based on what best represented them,” Brown said. “The children are chosen at random. “

In house meetings, members of each house will meet at different locations on campus.

“We’re going to focus on every house meeting, like the first one that will talk about what the symbols of our house they can find on the ridge mean, and we’re going to talk about our first two expectations, which are eye contact.” . and respect for people and property, ”said Brown.

Brown said two expectations will be focused at every house meeting. Meeting these expectations is how students earn points for their homes.

Each house also has a flag which will fly on the school’s flag pole, if their team has the most points for the week.

“Then we have an annual house winner – the house champion we call it,” Brown said.

The big champion from last year was Reveur: House of Dreamers.

Brown said she saw the program make an impact on returning students.

“One of the most notable things I noticed on the first day of class was that I didn’t have to tell them to talk to me to say hello… they just know you should say hello to someone when you do. see, “Brown said.

She said the students also made eye contact while talking to her.