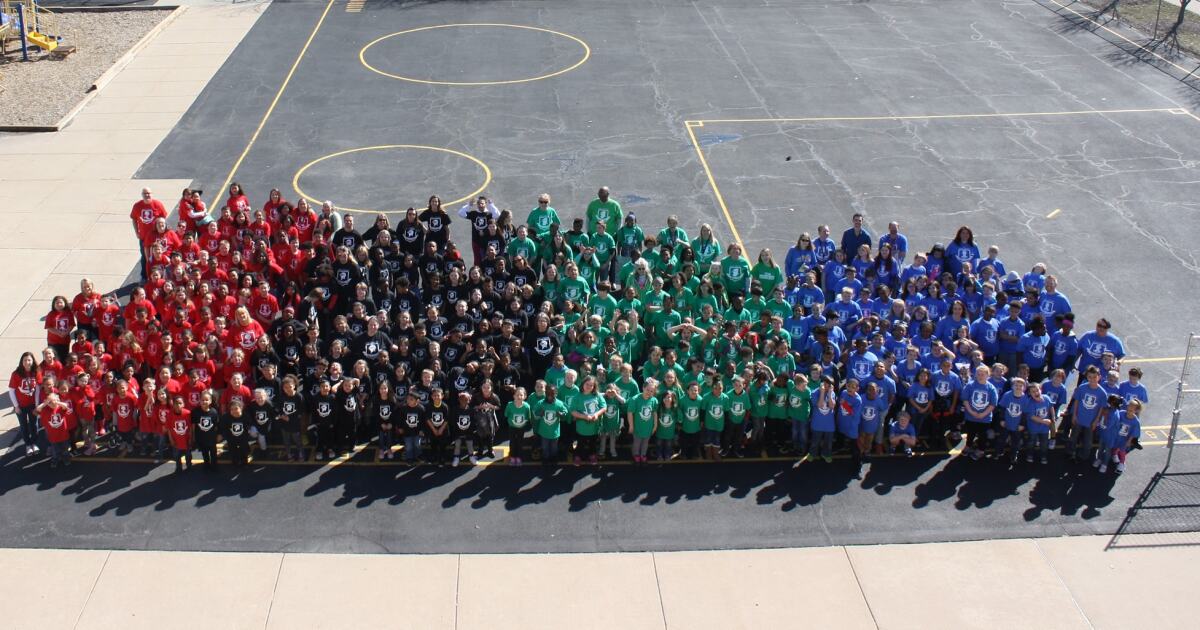 On paper, Marcus Brown is a fifth grader at Irving Elementary School in West Bloomington. But he has another much cooler title: Leader of the Black House of Altruism, the House of Donors.

Like something “Harry Potter”, Marcus’ school is the first in Bloomington-Normal to fully embrace a house system. Students are assigned to one of four houses, each with its own color and traits, and stay there until they leave school. They compete throughout the year to earn points by going above and beyond the daily expectations of an Irving student.

“Everyone works as a team,” said Marcus, also student council leader at Irving. “We’re all trying to work together to earn house points, and if we do win we’re proud of ourselves because we’ve put all of that effort into it. We’re not supposed to brag about it, but we love to party.

The house system was created at Ron Clark Academy in Atlanta, a national leader in education. A few years ago, Irving’s teacher Tom Hopper visited Ron Clark for professional development and decided to try out houses in his second-grade class. It was a success and the new principal Messina Lambert extended it to the whole school from the 2018-19 school year.

Lambert said this has created a great culture in Irving, which has many low-income students and those who come and go during the school year. Lambert said kids make faster connections, help each other and are motivated to go the extra mile to earn points.

“There’s been such pride (in that) at Irving, because that’s what we do,” Lambert said. “We’re really proud to be the only school (in Bloomington-Normal) that does it school-wide. While we are not selfish, we would like to see other schools do this school wide as well, as the benefits for children are incredible.

There are four houses in Irving: Black House of Altruismo (Givers), Red House of Amistad (Amistad), Green House of Isibindi (Courage) or the Blue House of Reveur (Dreamers). Irving’s 360 students are randomly assigned their homes. Teachers and staff are also in the homes.

Points are awarded at a teacher’s discretion, as if a student is very respectful of a peer or doing something extraordinary. Points are counted four times a year, when separate “house parties” are held and the school meets in the gymnasium to hear which house has won.

“It’s huge for the kids. They love house parties, ”Lambert said. “One of the principles of having a house system is that we celebrate everyone all the time. So even though there is competition, it doesn’t matter which house someone is in, if they earn a house point, we’re happy.

Lambert said Irving is a great fit for the home system in part because of its diverse student body. About 80% of students come from low-income families, among the highest of any Bloomington-Normal school. More than that, Irving’s high student mobility rate is 18%, which means more students enter school mid-year than other buildings.

Lambert, now in his second year as principal, said one of his goals is to make these new students feel a part of their own the moment they arrive at Irving.

“It can take time to develop friendships and get to know the ins and outs of a school you’ve never attended before. The rules can be a little different. Expectations, from big things to small things, ”Lambert said. “But I wanted these kids to have that collective sense of belonging very quickly.”

Hopper, the second-grade teacher who piloted the house system in his classroom, said the benefits quickly became evident. The students recognized that they were part of something “bigger than themselves” and the shared responsibility for the points system was a great motivator, he said.

“All of a sudden we had these kids who might not have worked together before, but they had formed that kind of family inside this classroom,” Hopper said. “It will be four or five children, where the only real thing they had in common was the house they were in.”

The competition is fun, he says. There are dashboards in the hallway. It’s in a good mood, although there is occasional chatter, he said.

“Never has a student asked me, ‘What are we going to gain? It’s never about that. It is a feeling of pride. It’s a sense of accomplishment, that they went out and did their best.

Irving is only halfway through his second year of running the house system. Erin Knuth taught Irving for 13 years, so she remembers what it was like before Altruismo, Amistad, Isibindi, Reveur.

Knuth, who teaches in fifth grade, said she loved it.

“You were in your fifth year, fourth year, third year – everyone was a little bit apart before. Now, yes, you’re at a different grade level, but you’re still working together. You have fifth graders working with first graders because they are in the same house. So it’s that cohesion, it’s that teamwork, ”said Knuth. “This aspect was missing before. “

Joy Searby, a first grade teacher, said the students were totally on board, especially the younger ones. Searby is a huge “Harry Potter” fan, but like Knuth, she was a bit skeptical when Lambert first proposed expanding the school-wide house system. It sounded like a big business.

“It was a lot easier once we started talking about it and seeing how convenient it was. It doesn’t change what we’re already doing. It just gives one more way of positive reinforcement, which is easy, ”Searby said.

Irving is still adding new elements to his house system. This year he has put in place internal leaders, with additional responsibilities for the older Irving students. Irving is also working to integrate student council into its homes, adding a representative element to the system.

Aaliyah Trice, a fourth grader, is a leader of the Red House of Amistad. She calls work a privilege.

“We help little kids, like they’re jumping around, to calm down,” she said. “We help with the dances. We help with the cheers. We stand up in the crowd and cheer on our house. No matter where they are, we applaud for everyone.

People like you appreciate experienced, knowledgeable, and award-winning journalism that covers meaningful stories at Bloomington-Normal. To support more stories and interviews like this, please consider contributing.