Mother of the Maid is a testament to the love of mothers everywhere, just in time for Mother’s Day 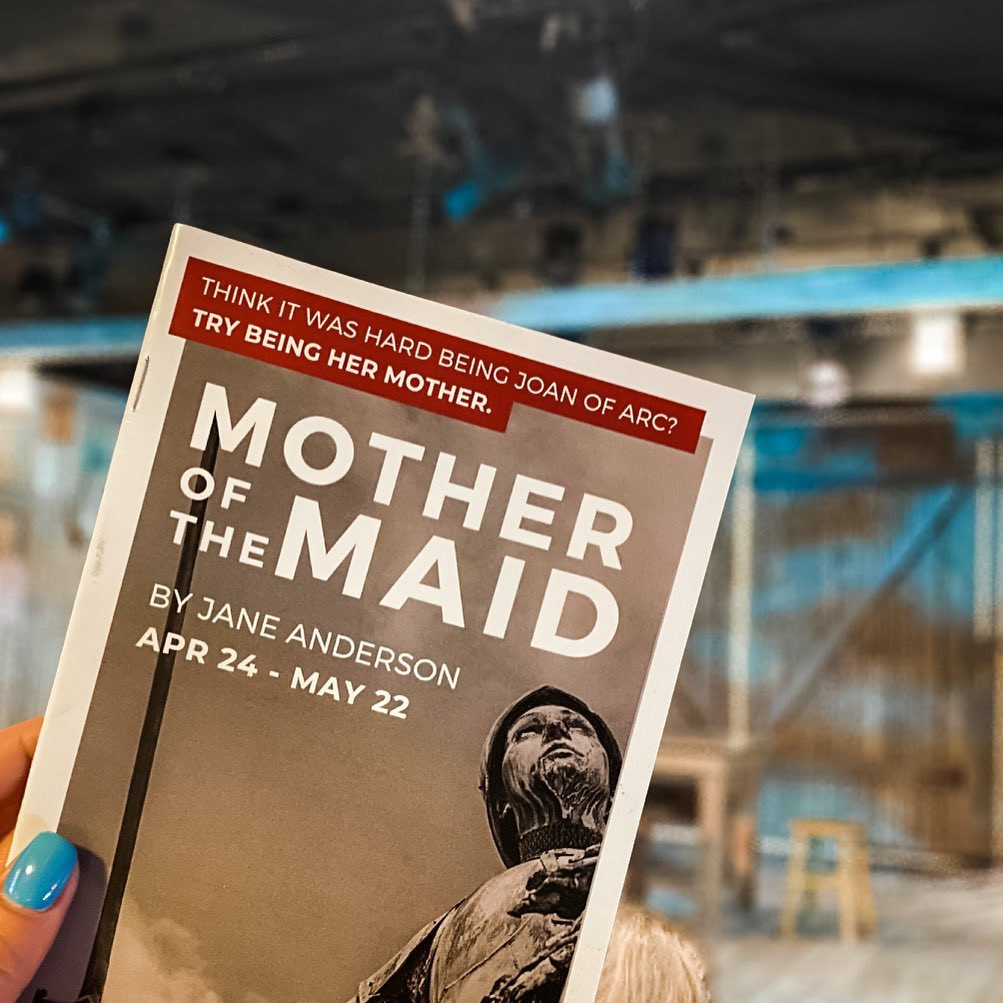 “Do you think it was hard to be Joan of Arc? Try to be his mother,” the ads intone. The maid’s mother does not disappoint. This SoCal premiere of Jane Anderson’s dramatic work delves into the psyche of a mother…and not just any mother, but that of the infamous Joan of Arc, as she runs the Moxie Theater from April 24-22. May 2022.

This production, Desiree Clark’s first Moxie film, was exactly what it promised. As the story captures the life of Joan Arc (Mikaela Rae Macias) from her visions of Saint Catherine to her ultimate death at the stake for heresy and beyond, the real focus is on the emotional journey of her mother, Isabelle (successfully played by Jennifer Eve Thorn), as she goes from pious but skeptical, to protective and proud, to broken and rebuilt. Thorn and Macias shine in their respective roles. Macias carries a charisma through Act 1—bright eyes and a bounce in her step—that contrasts how broken she becomes when she finally finds herself abandoned by her saint and judged for heresy. Thorn begins the show by breaking the fourth wall, daringly making eye contact with audience members, and acting out a third-person monologue. However, Thorn’s real triumph lies in her reach and the way she communicates Isabelle’s fear of the unknown, anger for a system that so devastatingly betrayed her child, and the breakup, protected by intuition. of a mother that what her daughter needs is strength in her hour of need. There really are no words to describe how beautifully she creates those moments that every mother will recognize.

In fact, all the actors in this production were well cast and capable, each having a very different role to fulfill in encouraging, deterring, supporting or catapulting Jeanne’s journey to the front lines of the French military. Dave Rivas plays his father, Jacques Arc, a tough, hyper-masculine “Da” who spends much of the production bragging, but ultimately delivers a moving monologue near the end of the production that shows how much he truly cares about his life. daughter, yet affable and immature soldier/brother Pierre Arc is played with energy and verve by Zack King, especially hilarious in his recognizable teenage mannerisms as he listens to Joan’s daring letter dictated to his enemies.

Once Isabelle arrives at court, she is greeted by Nicole, the Lady of the Court (Sarah Alida LeClair), who deftly plays the larger-than-life nobility. LeClair fills the room with dramatic cuteness (in a stunning iridescent brown dupioni gown, replete with chapel train, luxe ruching and gold trim, created by costume designer Courtney Ohnstad) tempered with a mother’s best intentions who has never known anything but privilege – it’s a stark contrast to Isabelle’s outspoken sensibility, and yet it’s clear that both women love their children deeply. In a cliche moment, Isabelle rejects Nicole’s offer to invite Joan to her summer house, clearly upset that she can’t offer her daughter the same; the jealousy is poignant and recognizable, as is the benevolent intent on Nicole’s side. The interaction, even at such a distant historical time, feels like it could be happening today. Rounding out the cast, Marc C. Petrich’s vocal inflections and mannerisms are a perfect fit for 15th-century priest Father Gilbert, and Sergio Diaz-Delgado solidly portrays the stoic Scribe and Guard.

Like the aforementioned Lady of the Court garments, most of the costume pieces throughout production were beautifully crafted, perfectly fitted and with careful attention to detail, from the trimmings to the leather corset ties. In particular, Jacques’ blue dress with a frog closure and gold emblems on the cuffs was a clear change of scenery at the king’s court, and Joan’s simple but effective prison costume, consisting of a torn white blouse, beige pants and bare feet, made Macias appear like a child. heralding the heartache any history buff knew was to come.

The performances were elegantly framed in a stunning monochromatic set with wood grain throughout, designed by set designer Yi-Chien Lee. A beam suspended across the stage housed a trio of lights with closely spaced vertical slats encircling the Arc Residence walls, allowing the lighting designer to play with the light bleed, to great effect. The detail was incredible, from the copper cups on a table, to the wheat stalks and tree branches at intervals throughout, to the huge barn doors near the back. Cream clothes hung on the walls and clotheslines served as curtains backstage, and immersive woodwind sounds immediately transported the audience, even as they took their seats, to another time and another place.

One consideration to note, which is perhaps a reflection on the script and sound design choices more than the actors’ performances: while the poster lists the historically accurate setting of 1429 in France, a dialectical language in the script and the performers’ accents created dissonance; after all, “you hear”, “it ain’t”, and “shit” were not etymologically appropriate to the 1400s. Adding to this situational friction, the instrumental soundtracks appearing throughout the production, including Girls Just Want to Have Fun, Survivor and In the End, which were sometimes just recognizable enough to take the audience away from the story.

All in all, this production was beautifully crafted and would be a perfect mother/daughter get-together heading into the upcoming Mother’s Day weekend. Mother of the Maid continues for the remaining 3 weekends, until May 22: Thursday (7:30 p.m.), Friday/Saturday (8 p.m.) and Sunday (2 p.m.). For tickets: www.moxietheatre.com/tickets/.