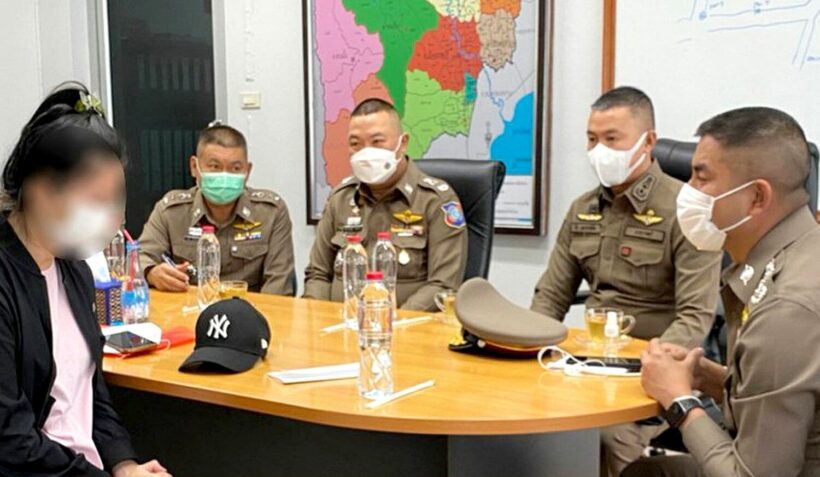 A policewoman who claimed to have mental health issues turned herself in to police yesterday accused of torturing a female soldier who worked as a maid. The twisted story involved a 43-year-old Special Branch Office policewoman pretending to be a senator’s wife and manipulating a 30-year-old woman into working in indentured servitude for several years.

The Deputy National Police Chief questioned the woman at Muang Police Station in Ratcha Buri yesterday as details of a story first came to light when the victim contacted an influencer named Gun Jompalang. He shared the story on Facebook and took the woman to file a complaint with the police. The story was then featured on Channel 3 TV’s “Hone Krasae” program airing on Thursday, and the police took action from there.

The 30-year-old first met the policewoman several years ago, initially working in her cafe. When it closed, the policewoman promised to enlist her torture victim in the army, but charged him a fee of 500,000 baht which had to be paid back slowly. Although she kept her promise and the current soldier has paid back 260,000 baht so far, the policewoman later forced her out of the army in May under threat of abuse.

The soldier repaid his debt, with his boss withholding every month except 3,000 baht from his salary, but the policewoman became increasingly violent, torturing his victim, hitting his head and nose with a metal rod, burning the skin with a curling iron, and spraying alcohol on her hair before setting it on fire.

The policewoman defended herself against the accusation of torturing the woman by bursting into tears and apologizing after presenting police with a medical certificate stating that she had been undergoing treatment for mental illness for two years and that she was unable to control her rage during the abuse.

Her direct commander has been instructed to take disciplinary action and the Special Branch Office will set up a commission of inquiry, but the policewoman also faces a host of legal charges for torturing the woman, including charges under the anti-trafficking law, it is illegal to detain, use force against another person, and to be a government official who benefits from forced labor.

Police searched her home for evidence after taking her into custody and decided not to deny her bail, saying she was at low risk of fleeing, provided she did not intimidate not the woman she abused or interfere with the police investigation.