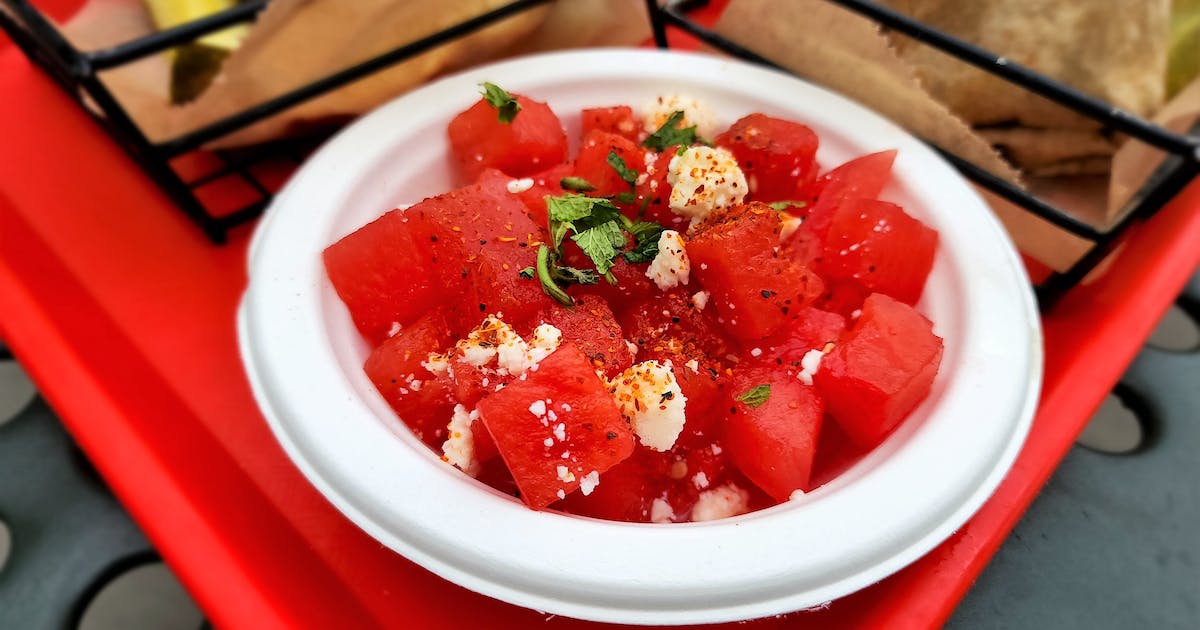 In the height of summer, I could eat watermelon three meals a day. So it didn’t take much convincing to add this simple entree ($7.50) to my order at Sandcastle, the Lake Nokomis beach stand now in its final season.

Pieces of ruby ​​red, perfectly cubed melon are lightly marinated with lime and sprinkled even more lightly with tajin seasoning, a few strips of mint chiffonade and a handful of queso fresco crumbles. The props accomplish the nearly impossible task of making the fruit taste even better, augmenting its watermelon while stepping aside wisely to let the fruit do most of the work. It’s summer in a bowl.

Ten years after Sandcastle’s formidable run began, owners Amy Greeley and her husband, chef Doug Flicker, along with Chele Payer, are moving away from the beloved stand, known for its zhushed hot dogs and a simple BLT that , like watermelon, lets the classic ingredients shine ($9). Get them before they disappear. (Sharyn Jackson)

I come from a long line of artichoke obsessives. Growing up, artichoke season always came with a little cauldron of melted butter; we ate everything that was edible. It’s a dish I’ve mostly enjoyed at home, as it’s rarely served in restaurants. So you can only imagine my joy when I saw artichokes on the menu at Petite León.

All of us in the Taste section traded tricks as we fell in love with James Beard Award-nominated chef Jorge Guzmán and Ben Rients’ restaurant. It can be an amazing display of culinary, cocktail and hospitality acumen, but I like this restaurant better as a casual hangout in the neighborhood. Sitting across from a dear friend on a recent Thursday is exactly what it was: a blackboard sketched out with specials, familiar faces seated at a nearby table, a dining room buzzing with lively chatter.

The artichoke ($13) was beautifully prepared, cut in half to show off the inner purple petals nestled inside the husky green outer. Above the heart was a smoky chili oil that was mixed with crispy pieces of garlic and sesame seeds. That’s the beauty of chef-prepared vegetables when handled with care: utterly satisfying and such a treat. Plus, it was perfect for sharing with my vegetarian best friend and paired with a heavenly Negroni. (Joy Summers)

The first time I experienced pollo al carbon was an exercise in extreme patience. We had arrived at a backyard party just as an army of raw birds paraded past, all smeared in orange-red spices, heading for the grill. Coals emanated from the heat and ash as crowds of people turned away from drinks and conversation to watch the spectacle, chicken applied to dark grill grates. The juices were soon sizzling, spitting fire as the grill master tamed the flames with a spray bottle of water. The best and worst part of this day was waiting and watching these beautiful birds roast very slowly. All the while, the meat gave off a tantalizing aroma of marinade, fat and the promise of salty skin. Once the meat was finally ready, we descended like hungry beasts around a waterhole. The reward was a gloriously moist chicken meal.

I hadn’t come across these rich flavors until recently when I placed a weekday takeout order at Pollo Movil. This Lake Street restaurant from owner Edgar Hernandez serves up the most phenomenal carbon pollo al I’ve had since that backyard party, and perhaps best of all, there’s virtually no wait.

The restaurant specializes in Mexican fare, with tacos, burritos, and cinnamon horchata on the menu, but the main attraction is the chicken. The birds are marinated in a deeply flavorful blend of citrus fruits, Mexican oregano, dried chiles, cumin, garlic and onions, then grilled over hot coals. The result is crispy, fatty bits of skin that are just a tad salty, while the meat packs in a wealth of juices. Ordering an eight piece combo for my family got us plenty of chicken lime cilantro rice, roast pork charro beans and fresh pico de gallo for just $25. It was a godsend that fed all four of us leftovers for the next day. (JS)

It’s been almost a year since EaTo launched in downtown Minneapolis (in what was once Eastside) as a patio-only pizza and gelato restaurant. Now there is a full menu. The expansive (and gorgeous) interior is open to guests, and parts of the floor plan have been converted into gourmet shops.

In the small food market near the main entrance, you can pick up a variety of ingredients, both homemade and from local artisan vendors (Aliment Pasta, Big Watt, Red Table Meat); pots of sauce and packets of imported pasta; and, from a freezer box, prepared meals. A friend who lives in the neighborhood loved the roasted vegetable lasagna ($20), so I took one home and warmed it up that night for dinner.

It was a gorgeous evening for dinner on deck, the kind of night I would normally never consider serving a hot cheesy noodle casserole. But Chef Joan Mendez’s take on lasagna has made it a summer dream. The vegetables – mine had leeks, fennel, zucchini and mushrooms – are smoked in the restaurant’s wood-fired pizza oven, where they get a light shade without losing their crunch. They are topped with a light and bright homemade red sauce, mozzarella, parmesan and homemade ricotta, all held together by premium noodles imported from Italy. If I lived in the neighborhood, this would be my go-to dinner for the remaining weeks of summer.

Shelves in other parts of the space are devoted to trinkets and household items, glasses, cookbooks, and more. And an outstanding bottle shop offers a carefully selected selection of mostly Italian wines, many of which are natural and unfiltered, such as a refreshing Piedmontese chilled red that was the perfect pairing for a hot summer dish, if any. had one. (S.J.)

The green burger at Burger Press

There’s a new burger joint in town, and it’s creating a buzz. Burger Press opened less than two months ago in a strip mall in Edina, replacing Capriotti’s Sandwich Shop. Photos of the Pastrami Burger, Oklahoma Burger and Chili Burger have been doing the rounds on social media, and the local restaurant is doing great business.

As delicious as the burgers look – get them single, double or triple – it was the Green Burger ($7.99) that caught my eye. A falafel patty replaces the beef patty and is served with truffle mayonnaise, lettuce, onion, tomato and really good pickles. There is always some degree of risk when ordering a meatless burger. Will it taste? Is it strong enough to support other toppings without coming off the bread? The Green Burger passes with flying colors. Not only was it good (the falafel was flavorful and had a slight kick), but it was good to eat – a clean, lighter dish on a hot summer night.

Then we ordered one of the signature shakes ($7.50) for dessert. The breakfast cereals are the star of the show here (you can even order a bowl of cereal and milk). Our Oreo shake was filled with Oreos and Cookie Crisp cereal and a swirl of chocolate syrup. I was skeptical, but it works well. So good, I was thinking about it a few days later. (Purists can get classic flavors with or without blends.)

Other Burger Press offerings include several varieties of hot dogs and all the fried sides you could ask for, from zucchini fries to cheese curds. But the fries ($3.49), lightly dusted with seasoned salt, are the way to go. They appeal as much to those who prefer them thin and crunchy (me) as to those who like them more potatoes (my wife). That alone was worth the trip. (Nicole Hvidsten)