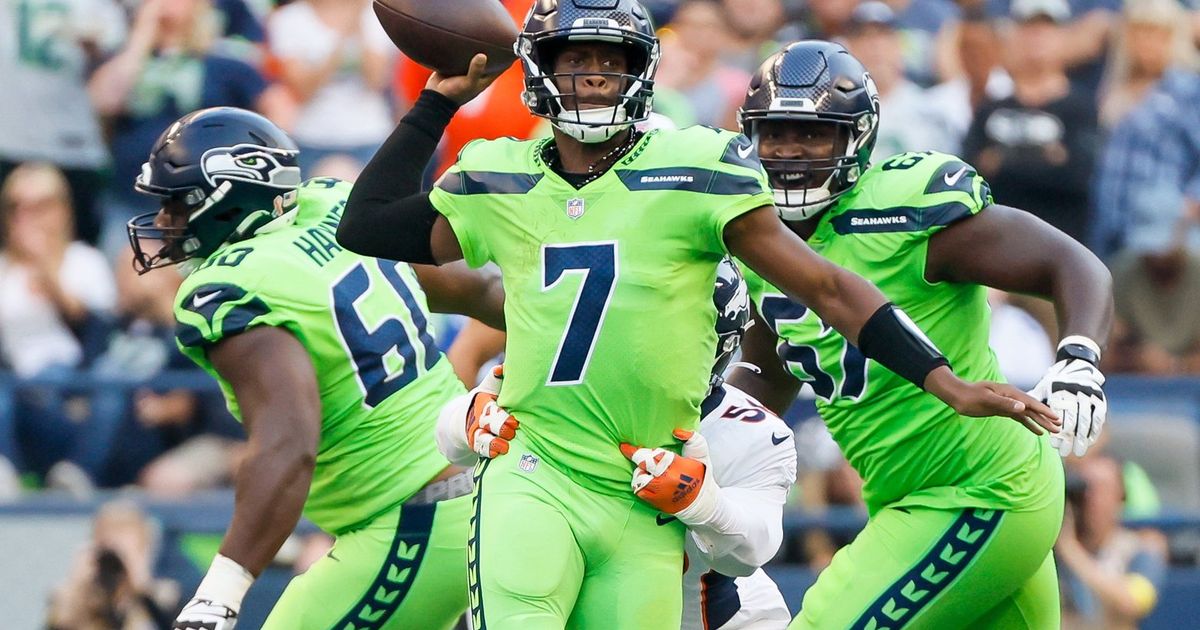 Russell Wilson was booed relentlessly upon his return to Seattle, and his replacement was serenaded with chants of “Geno!” Geno! Geno!” throughout the game, as Geno Smith and the Seahawks upset the Denver Broncos 17-16 to open their seasons Monday night in front of a packed house at Lumen Field.

Three immediate impressions of the game:

Strange call, isn’t it, for the Broncos to settle for a 64-yard field goal attempt there in the final seconds?

Predictably, Brandon McManus’ 64-yard attempt failed (and wide left), allowing Smith to take a knee three times to close out one of the most unlikely wins of Pete Carroll’s tenure. in Seattle.

It was certainly a little awkward, the reunion between the longtime Seahawks coach and his former star QB.

Carroll and Wilson only exchanged a brief hug on the court after the game.

Wilson completed 29 of 42 for 340 yards with a touchdown, but he couldn’t get the Broncos into the end zone when they needed to.

Wilson is 4-14 in games when attempting 40 or more passes.

The Seahawks defense was the story of the game.

Three times they stopped Denver drives deep in Seattle territory, limiting them to just one field goal on those three trips to the red zone.

Seattle stuffed the Broncos twice on the goal line in the third quarter.

The Broncos had two third-quarter chances to score from inside Seattle’s 1-yard line and fell short on both.

On the first, Quandre Diggs forced a fumble from Melvin Gordon just past the goal line on a fourth down. Michael Jackson picked up the fumble and returned it to the Seattle 10.

Late in the third, on Seattle 1’s third base, Al Woods and Uchenna Nwosu crossed the line and hit Javonte Williams in the backfield, forcing a fumble. Jackson (again) recovered the fumble, this time in the end zone for a touchback.

Impressive stuff from a defense making its debut with its new 3-4 front.

On Denver’s second-to-last drive in the fourth quarter, defensive lineman Shelby Harris — acquired from Denver in the trade for Wilson in March — hit Wilson to force an incomplete on third down, forcing the Broncos to settle. from a field goal, reducing Seattle’s lead to 17-16.

Smith was one of the last Seahawks players to leave the field, cheering and raising both fists in the air as Seahawks fans continued to cheer him on.

What a night. What a welcome.

The Seahawks couldn’t have asked for much more from Smith, who was making his first Week 1 start since 2014.

From the start, he was smooth and precise, completing his four passes for 71 yards and a touchdown to give the Seahawks a 7-0 lead on his touchdown pass to Will Dissly.

Smith added a 25-yard touchdown pass to tight end Colby Parkinson late in the second quarter to give the Seahawks a 17-10 halftime lead.

Wilson, you knew, was going to test the Seahawks’ young cornerbacks.

He tested them, okay.

With injuries mounting in the Seahawks’ secondary, Tariq Woolen started in the right corner in his NFL debut.

Michael Jackson, a fourth-year professional, was making his first career start in the left corner.

And rookie Coby Bryant was part of the nickel-and-dime package as an extra defensive back.

Seahawks coaches love Woolen’s potential — few cornerbacks are as long, tall and quick as him — but as a rookie, he’ll take his pieces. Worse still, Woolen ended up leaving the game in the fourth quarter with an apparent shoulder injury. There was no immediate word on the severity.

Things weren’t looking any better for rookie nickelback Bryant, who was beaten on Wilson’s 67-yard touchdown pass to Jerry Jeudy in the second quarter.

The Seattle secondary suffered a major blow in the second quarter when starting safety Jamal Adams injured his knee on a hit on Wilson.

Adams was taken from the medical tent to the sideline in a trolley. He was visibly upset.

Josh Jones replaced Adams at safety for the rest of the game.