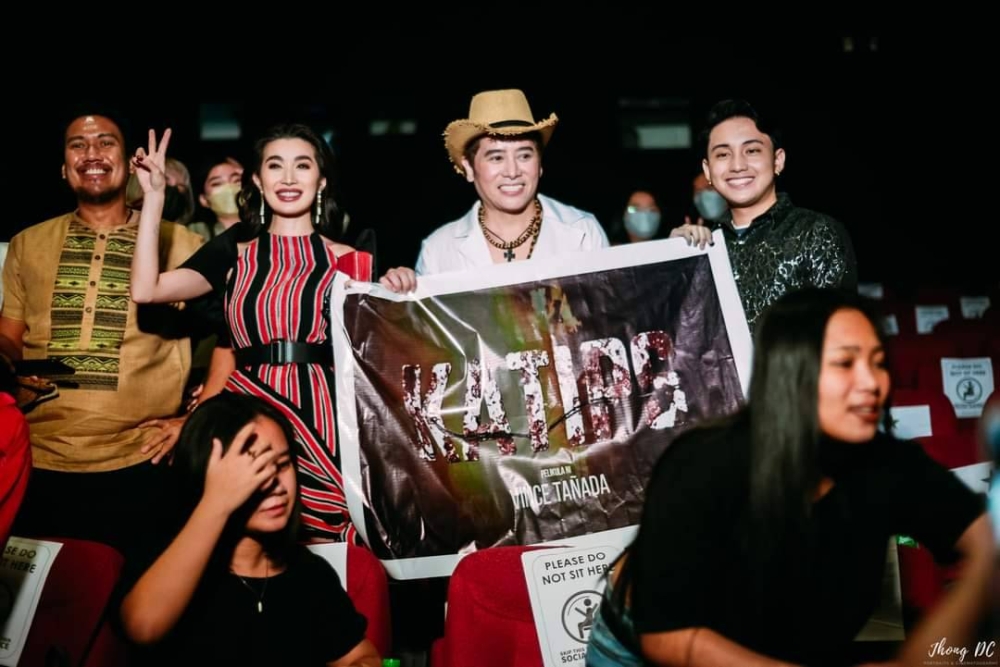 It’s a battle reminiscent of David versus Goliath as Vince Tañada’s “Katips: The Movie,” a short film produced by his Philstagers’ Films, comes head-to-head with the dreaded “Maid in Malacañang” produced by Viva Films.

Both films open August 3 in theaters nationwide. And Vince isn’t afraid of the strong opposition he faces. He even concedes that “Katips: The Movie” doesn’t stand a chance against the Marcos family movie, but he wants audiences to see another side of the truth.

“As a writer, the film was written with the assistance of a historian to ensure that the chronological accuracy of events is rendered. I argue against revisionism of history as a stray fiber that continues to eat away at today’s society, especially young people”, He shared.

“As a film, the script underwent an overhaul without affecting the narrative. I did this to ensure that the film remained neutral in its political stance and continued only as a statement of facts about the realities ’70s through the late ’80s through the eyes of fictional students who might have been real people under different names.”

Get the latest news

delivered to your inbox

As a director, Vince decided to shoot a musical using different styles. He said the film was incomparable to any historical musicals ever made in the country so far. Using pseudo-realistic techniques and metaphors, the film is an exploration of the extent a filmmaker can use music, lights, costumes, visual effects and symbolism in order to deliver a story as poignant and as overwhelming than the reality, experienced first. -main will be for viewers.

“We are challenged by Maid in Malacañang, that’s why Direk Joel Lamangan reacted and said that he will also make a film to show what happened during martial law. Pero siya gagawa pa lang mais j I already have a finished movie and I’m going to show it so people can see another side of the story.”

“If the Marcos family says the movie is how they felt before being exiled to Hawaii, it’s the story of how we felt when they were still in power.”

Vince added that they only had a few theaters since the decision to release Katips: The Movie in theaters was an impulsive decision.

But he’s willing to show “Katips: The Movie” to Sen. Imee Marcos since his movie has no anti-Marcos content.

He’s also grateful to FAMAS for awarding the film 17 nominations, including Best Picture and Best Director which he, fingers crossed, hopes will win the awards on July 30.

He was born in Iloilo but moved to the United States to start a new life with his family. He went through many hardships and sacrifices while living in the United States. He had to take on odd jobs from an early age, such as cleaning houses and swimming pools.

But at a young age, he knows what he wants to achieve in life and pursues his dreams. But even there things were rather difficult, the idea that he had a family to come home to made the experience bearable.

He worked in care centers and hospices, caring for the sick and caring for patients without families.

Tommie then ventured to start a production company he called Excellence, with the aim of helping other Pinoy artists who wanted to find their niche in the entertainment field by developing talent and producing shows locally. and internationally.

He was part of the group that attended the iconic concert of Megastar Sharon Cuneta and Songbird of Asia, Ms. Regine Velasquez. He was impressed by the beauty of the concert and the exceptional performance of Sharon and Regine.

He also produced a concert for Jed Madela.

Tommie has expressed interest in producing a gig for Moira dela Torre and Gigi de Lana. He plans to return to Manila and bring American talent with him who can collaborate with local artists in a show.

Although he sings himself, he did not pursue a career as a professional singer although he used to sing in a choir. But if he gets the chance, he might appear as a guest artist in one of the future shows he will produce later.