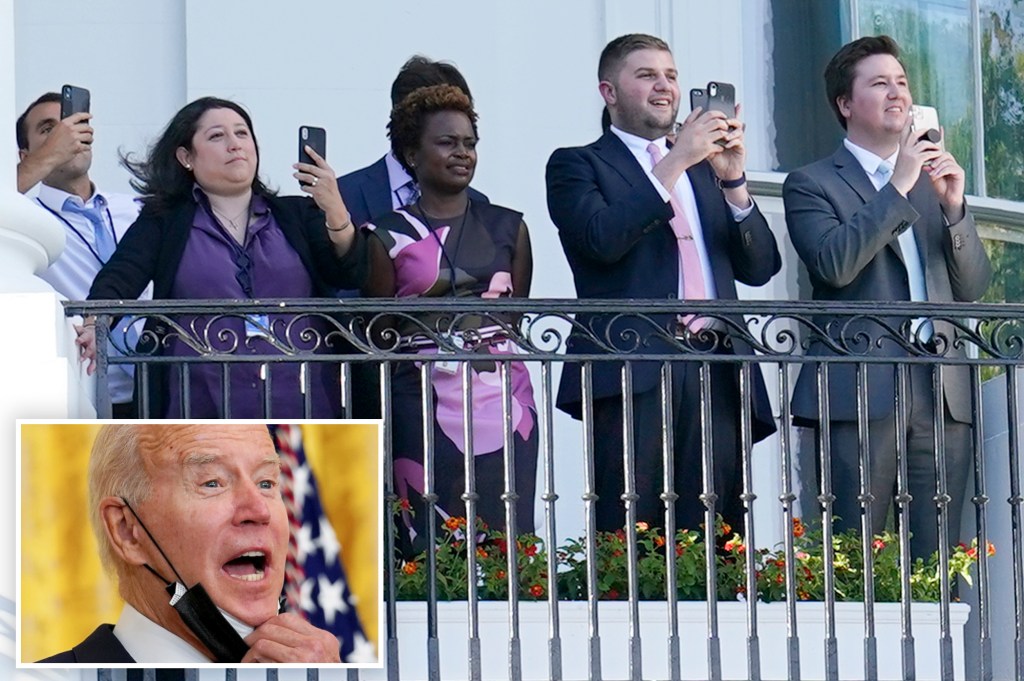 A new report – and President Biden’s own words – has rekindled concerns about the harshness with which the nation’s commander-in-chief is being treated by his staff.

White House staff are on pins and needles when Biden speaks in public, fearing he will answer reporters’ questions afterwards and scramble carefully crafted messages from the West Wing, according to Politico.

The level of commotion is so high that some staff will mute or turn off his remarks, the site reported on Thursday.

“I know people who don’t usually watch it live for that reason,” an official told Politico.

The president’s advisers are trying to control him tightly, telling him to refuse to answer or answer a few questions shouted by reporters, according to the report.

And Biden is known to admit, “I’m really going to be in trouble” before opening the floor for questions.

White House press secretary Jen Psaki admitted in an interview in May that allowing Biden, 78, to answer questions is “not something we recommend.”

“In fact, we often say, ‘Don’t answer questions,’” ​​Psaki said, adding, “He’s going to do whatever he wants to do because he’s the President of the United States.

The White House has said Biden likes to tailor his own message.

“As the President has shown time and again since he announced his candidacy over two years ago, he is the most effective communicator for his vision and his agenda,” said spokesperson Mike Gwin. to Politico in an email.

“The president deeply appreciates the role of the press – which is why he regularly takes the time to answer their questions in interviews, press conferences and the dozens of media availabilities he has made since taking office.” , did he declare.

Biden is aware of his propensity to be a “goof machine” and on a teleconference last month, thanking members of the U.S. team who competed in the Tokyo Olympics, he spoke about it.

“Anyway, I should go. I can get in trouble here. But I’m in trouble for the things I say, I know. No one ever doubts that I mean what I say; the problem is, sometimes I say all I want to say, ”he told the athletes towards the end of their meeting.

While Biden considers himself a straight shooter, his verbal blunders can also deal a self-inflicted blow.

Speaking at the White House on July 8 about his deadline to leave Afghanistan, Biden laughed at the possibility of the Taliban returning to power.

“The likelihood of the Taliban invading everything and owning the whole country is highly unlikely,” he said.

Biden also said the mission in Afghanistan “has not yet failed.”

A little over a month later, Taliban fighters entered the capital, Kabul, and stormed the presidential palace, stopping to pose for photos.

In a case where Biden left the stage at a presser and then returned to answer questions, the president lashed out at CNN’s Kaitlin Collins, who shouted a question about Russian President Vladimir Putin.

“Why are you so sure he will change his behavior, Mr. President?” Collins asked at the end of a press conference in Geneva, Switzerland, after the June summit between Biden and Putin.

“I’m not sure he’ll change his behavior!” What the hell? What are you doing all the time? When did I say I was confident? Biden countered as he walked towards her with his finger in the air.

“I’m not sure of anything, I’m just stating the facts,” Biden told him, before saying, “If you don’t understand that, you’re in the wrong business.”

He then apologized to Collins for the explosion.

Days before his summit with Putin, Biden blurted out at a meeting of the G-7 countries in Britain that his White House officials provided him with a list of people to contact at press conferences.

“I’m sorry, I’m going to be in trouble with the staff if I don’t do it the right way,” Biden said after responding to a question from a Bloomberg reporter.

Then, at the end of the press conference, Biden was walking away when a reporter shouted a question.

“I’m going to be in trouble with my staff. Yeah, go ahead. But pretend I didn’t answer you, ”Biden said.

The president has been criticized for not answering questions at solo press conferences on various issues and for limiting back-and-forth exchanges when speaking to reporters when he was about to leave the House White.

At a White House press conference on the coronavirus in May, Biden told reporters, “I’m not supposed to answer all of these questions,” but continued the face-to-face with reporters.

“You guys are bad. I’m not supposed to answer all of these questions, ”the president said. “I’m supposed to leave, but I can’t resist your questions. “

Most recently, Biden was speaking to union leaders on Tuesday at a late Labor Day celebration at the White House event and noted what he was supposed to do in the end.

“Now I’m supposed to stop and walk out of the room here,” Biden said as he concluded his speech. “I’m going to stop, and with your permission, I’m going to come into the room because I want to say hello to you all.”